The Apache Software Foundation (ASF) manages more than 227 million lines of code, has 206 project management committees, leads more than 350 Apache projects and operates through a merit system, with more than 850 members, 8,100+ committers, and tens of thousands of contributors.

Previously the Apache Group, the ASF has grown to one of the largest open source foundations in the world today. It has built the well-known “Apache Way” through its leadership, sound community, and merit thinking, resulting in a set of schemes that promote the sustainable development of open source communities and guide the practice of open source projects.projects.

Since Tencent Open Source was created 11 years ago, a large number of Tencent engineers have formed a deep connection with the Apache community by participating and contributing to Apache projects. Furthermore, by learning from the Apache Way, Tencent is going through its open source journey.

At ApacheCon@Home 2021, I shared how Tencent thinks, explores, and practices open source according to the Apache Way. Below is a synopsis of this presentation:

The Apache Way is difficult to define. Although the Apache Way has evolved somewhat over the years, the original intention of “high transparency” has remained unchanged. In Mark Shan’s view, Tencent’s learning experience from the Apache Way can be summarized into five main points: 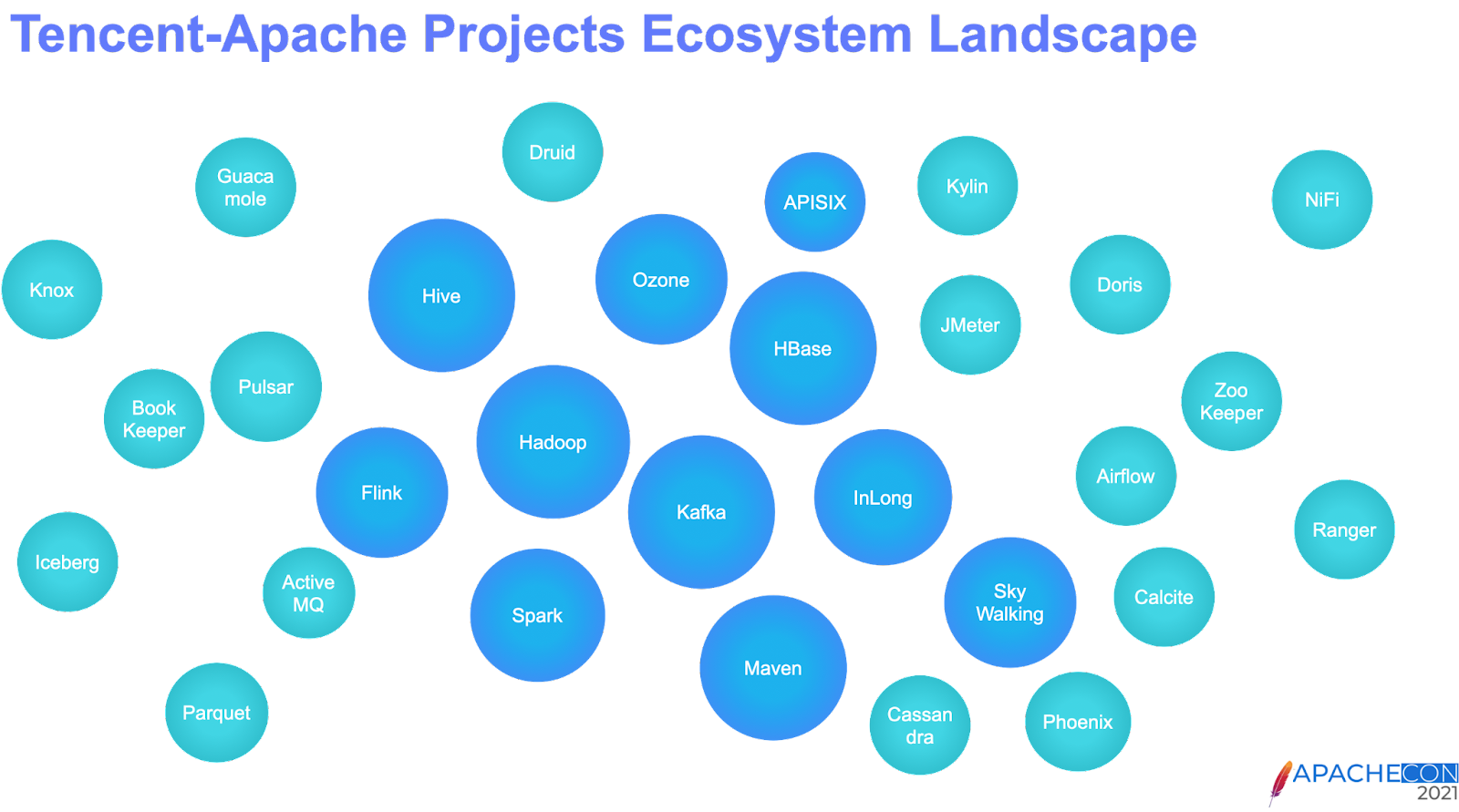 Apache projects and their communities are unique and diverse. In the community-led development process, Apache members formed the Apache Way based on their experience.

Many of Tencent’s open source practices and results are executed following the model of the Apache Way. After many years of incorporating open source into its culture, Tencent has formed an approach, “open collaboration, open source for good,” which reflects Tencent’s value and vision, and is honed based on open source best practices.

Tencent engineers have been contributing to and helping to lead many ASF projects, including:

Over the past four years, several Tencent engineers helped lead releases for Apache Hadoop 2.8.4 and 2.8.5, Apache Ozone 1.0.0 (Ozone was a sub-project of Apache Hadoop, and became a Top-Level Project in 2020), and Apache Spark 2.3.2. Tencent engineers contributed more than 20 features and optimizations to several versions of Hadoop, and are core contributors in multiple Apache computing and AI frameworks that include Flink, HBase, Hive, MXNet, and Parquet.

In 2019, Tencent donated TubeMQ, its self-developed trillion-level big data component, to the ASF through the Apache Incubator. In 2021 the project officially changed its name to Apache InLong, as part of its incubation process.

Tencent Applications based on Apache Projects

More than two dozen Apache projects are used in applications like WeChat, QQ, and Tencent Cloud. These big data projects are used for data transmission, storage, computing, and analysis demand scenarios, supported by other technical fields of service governance that include API gateways and observability.

For big data, Apache Ozone is one of the key projects that provides support for Tencent’s business scenarios that require large amounts of data and traffic. As early adopters, Tencent’s big data platform deployed an Ozone cluster with more than 1,000 nodes as the back-end storage for big data applications and also uses Ozone as the main storage solution for some private data warehouse projects.

Today, Tencent is connecting more and more businesses to Ozone, including data warehouses, machine learning platforms, Kubernetes cluster mounting volume, and more. Ozone helps Tencent operate stably, steadily, and at scale: of more than a thousand units without manual operation and maintenance intervention. In the process of verification and improvement, Tencent has done a lot of optimization work to improve performance and stability.

In addition, Apache Pulsar integrates messaging, storage and functional computing, and it adopts an architecture that separates storage and computing. Pulsar has successfully supported a large number of data and traffic business scenarios within Tencent Cloud and has some practical experience in cloud native environments, such as solving rapid and dynamic expansion and contraction, improving the utilization of cluster resources, and cluster forms.

In addition to sponsoring the ASF at the Platinum level, Tencent is currently active in more than 10 foundations worldwide as a top member, including the Linux Foundation and the CNCF Foundation. Tencent is actively involved with open source communities such as Kubernetes, Spring Cloud, MariaDB, and it is also promoting the implementation of open source projects, products and solutions.

Foundations provide intellectual property management framework, code repositories, issue tracking, technical guidance, project governance, financial and public relations, and other services. By participating in these foundations, Tencent has learned many more mature open source organizational governance models and used them to guide the process to open source its internal projects to the world.

Tencent has open sourced more than 130 independent cloud native, big data, artificial intelligence, database, and other projects to the world. These projects obtained more than 370,000 GitHub Stars, and have exceeded 2,000 contributors.

By open sourcing projects across internal departments and to the world, actively collaborating with developers and communities around the world, and training open source talents, Tencent’s open source ecosystem continuously improves and grows. 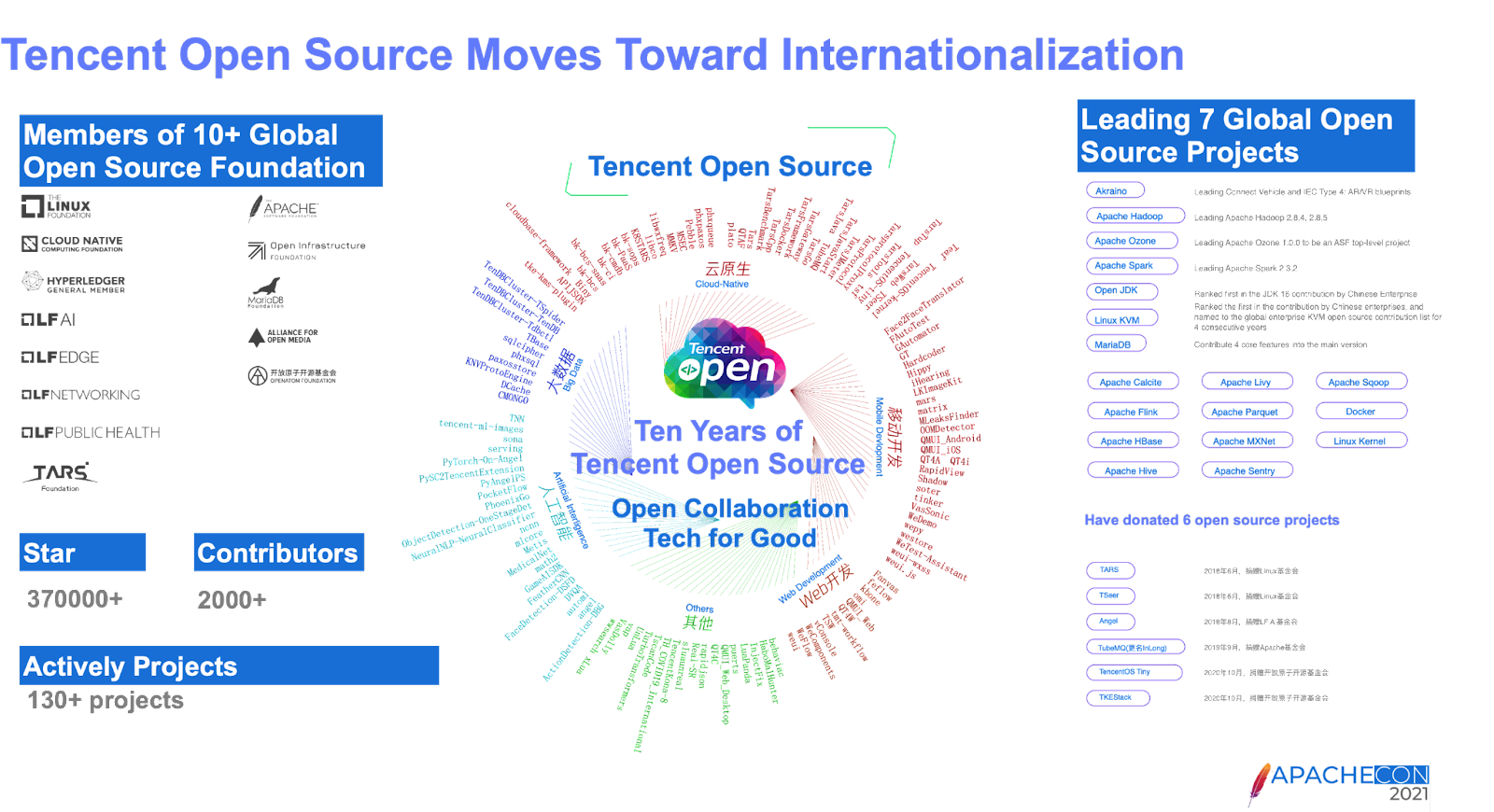 The open source laboratory is the landing place for the actual projects. Tencent Cloud plans to successively establish industry joint open source laboratories with well-known Chinese universities and open source organizations to provide a platform for students, researchers, and developers in the enterprise to contribute code and scenarios for open source projects to realize in the industry.

At the Cloud Native Industry Conference last May, Tencent Cloud and China’s Institute of Information and Communications Technology announced the official preparation of the Cloud Native Open Source White Paper, which is expected to be released by the end of the year. 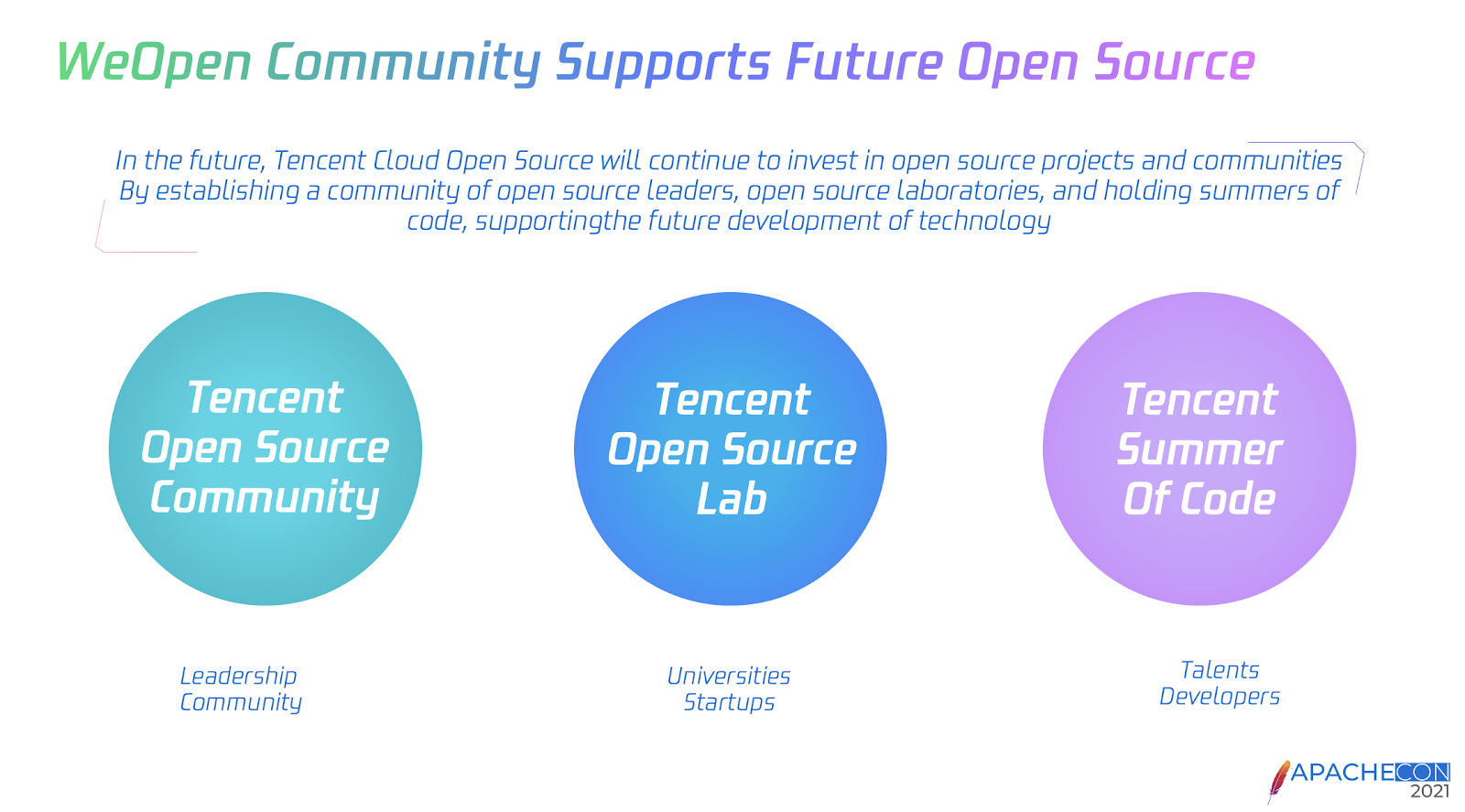 Tencent welcomes open source practitioners and companies to join their efforts in the above projects.

For more than 22 years, the ASF has proven that the Apache Way is one of the best practices for building an open organization that balances organizational structure and flexibility. Tencent continues to expand its own open source concepts, methodology, and ecosystem building, with plans to participate in more universities, companies, and organizations, while embracing the Apache Way into the future.

Mark Shan has a long career and practical experience in cloud-native, microservices, big data, edge computing, and open-source ecosystem. As the chairperson of Tencent Open Source Alliance, he works full of passion to build the ecosystem for Tencent Open Source and makes great efforts to accelerate innovation in technology and product with the open-source way. At Tencent Cloud, Mark leads the open-source team and works with organizations and communities including Apache Software Foundation,Linux Foundation, Open Atom Foundation, CAICT, COPU and others to build open-source ecosystem. He is also the observer of Linux Foundation Board, chairperson of TARS Foundation, TOC member of Open Atom Foundation and Magnolia Open Source Community, TSC member of Akraino Edge Stack, fellow of China Cloud Native Industry Alliance, advisor of Open Source Community.

“Success at Apache” is a monthly blog series that focuses on the processes behind why the ASF “just works”. “Sponsor Success at Apache” features insights and experiences by select ASF Sponsors https://apache.org/foundation/thanks.html